Autostrada Biennale II – Revolution Is Us

Autostrada Biennale II – Revolution Is Us 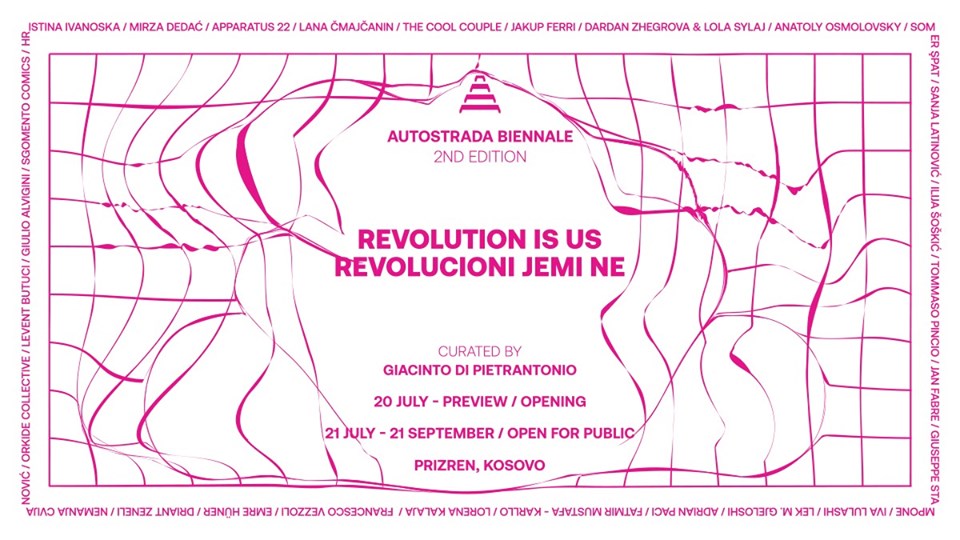 From Giacinto Di Pietrantonio, the curator of the second edition of Autostrada Biennale:

It is only natural that by living in a world where virtuality has become crucial to our existence, the first thing we do when we have an idea is to find a reference, which means going on the internet and searching on Google for news or references to confirm our idea. If we search for “La rivoluzione siamo noi” on Google, we find 27.000.000 results in 0.47 seconds. A colossal number. However, for anyone working with art, it is very encouraging to see that the first result which appears is Joseph Beuys’ piece of 1971, with the title “La Rivoluzione Siamo Noi”.
The title has not been translated, because Beuys named the piece in Italian, as he thought and did the work in Italy. A large paper print, a kind of poster, produced by the Modern Art Agency in Naples. An inkjet print of 185 x 106 cm with 180 copies in which Beuys is shown walking towards us with his felt hat on his head, a white shirt with a fisherman’s vest, jeans, boots and a shoulder bag.

This is one of the contemporary works of art that I prefer both for formal reasons and those of its content. It’s the one thing I would take on a deserted island. So, it is a work which I keep with me for many years, ever since I learned of it. Then, a few years ago, I managed to get a copy of it, and I installed it at the entrance of my house. In fact, anyone who comes to visit me is welcomed not only by me, but also by Joseph Beuys who walks behind me towards the guest, and at that moment, Beuys, I and the guest or guests become “Revolution Is Us”.

It is clear that nowadays, even more so than a few decades ago, the word revolution sounds suspect, given the collapse of the great narratives promising revolution ever since the Enlightenment, be they on the right or left. Those that produced the well-known dramas of the 20th century, and because of which everyone by the end of the century was in such a rush to bury the word revolution. Unfortunately by doing so, they also buried the utopias and hopes for the future which the word represents.

However, what “La Rivoluzione Siamo Noi” makes me think of is not so much the political revolutions, but the personal ones, and in the case of art, the linguistic ones. Art is, even when it does not seem to appear that way, always a bearer of novelty, openness, change, and above all freedom. I never thought of art as merely aesthetic, or pure contemplative pleasure, but as a human expression full of ethics and aesthetics. But above all as an aesthetic at the service of ethics, as Walter Benjamin suggests, and to which in some way this work also owes something to the work ‘Wanderer above the Mist’ of 1818, by Caspar David Friedrich.

It is known that Benjamin talks to us about the “Angelus Novus” painting of 1920, by Paul Klee, which portrays the angel of history with its body turned towards the future while its face and gaze are turned towards the past, and therefore between the old and the new. While Friedrich in the 1818 ‘Wanderer above the Mist’ depicts a solitary figure of the man and romantic traveler artist looking out at a great expanse of fog with his back turned to us. It is the romantic solitude of man in the face of the greatness of nature that Beuys replicates in the photographic work “Difesa della Natura (clavicembalo)” in 99.5 x 67 cm. in 1981, exactly ten years after “La Rivoluzione Siamo Noi”.

We find here many of the urgent questions of contemporary society, ranging from the relationship with society, history, nature, our being in the world, not in a descriptive-didactic or passive way, but active and moving towards the future. Not in a didactic way, otherwise it would not be art, but in an active way, and when I say active I do not refer to an idea of activism, but to that change of consciousness that every work of art provokes more or less. In fact, it must be said that the work of Beuys has nothing “revolutionary” from the point of view of a didactic iconography that should have contained a political symbol. In this case, the German greens, or the like.

The work indicates the journey towards and in and for the world. As “La Rivoluzione Siamo Noi” suggests, we must move towards the future, because we are not angels being blown by the storm of paradise, and neither are we immobile and contemplative wayfarers of a sea of fog, the metaphor of an uncertain future. But, like art, we are beings in movement, walking towards the future, that, even if uncertain, we must always look for. And it is this future that we are trying to understand with the new edition of Autostrada Biennale and with the invited artists:

Be in Kosovo © 2019 All Rights Reserved | Developed by Heren.Digital